As we celebrate International Women’s Day, it’s important to recognize the transformative role of women. 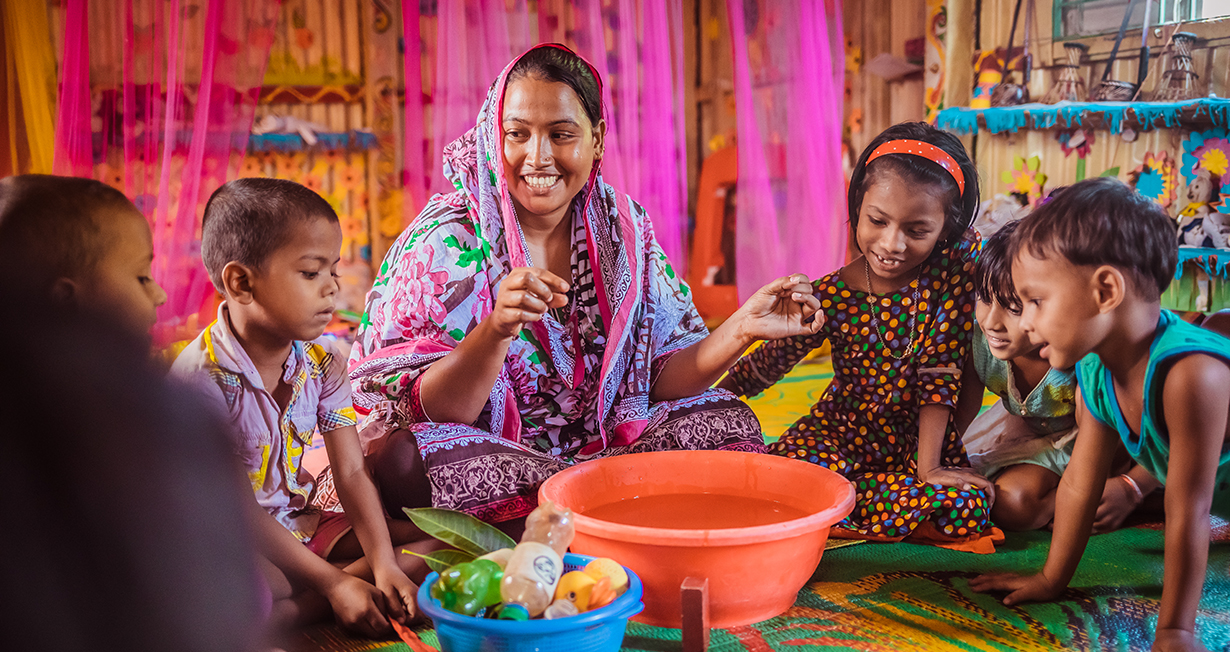 This piece was originally published in Inter Press Service. It has been reposted below.

Women around the world play crucial roles in education as formal educators, school staff members, and parents of students. But women are also transforming education as non-formal educators in ways that can be scaled to improve education broadly. As we celebrate International Women’s Day (March 8), it’s important that this transformative role is recognized.

I’ve seen it first-hand in my work with the BRAC Institute of Educational Development (BRAC IED) in Bangladesh, where we conduct research, develop curricula, and train and mentor women in Asia and Africa to become proficient in non-formal educational roles. That enables us to create educational innovations that can be scaled efficiently and broadly, because they rely on women in local communities, recruited from and trained in those communities, adapting and delivering programmes using locally available resources.

A recent study by researchers at the University of Cambridge and Columbia University, and supported by researchers in Bangladesh, underscores the point. A new two-year study reveals that an early childhood development model led by locally trained women has achieved one of the greatest goals of early childhood development – enabling children regardless of their initial readiness or level of privilege to enter kindergarten equally prepared.

The focus of the research is BRAC’s Play Lab model in Bangladesh. Play Labs provide safe spaces where children aged 3-5 engage in playful activities, supported by a flexible play-based curriculum – one that is culturally relevant and contextualized to suit local settings, and that promotes cognitive, language, physical, and social-emotional development. The activities are led by non-formal educators called Play Leaders – young women trained by BRAC IED, who also design the curriculum.

What’s so exciting about the study’s results is not only that it proves the extraordinary impact of Play Labs but that it demonstrates the power of the Play Leaders. These non-formal educators are the backbone of this study, and what’s even more encouraging is that there are young women whose potential is ready to be unlocked in every community in the world. That’s the key to scaling this proven solution, and a new Play Lab PlayBook provides essential resources and tools to equip partners and practitioners to scale this approach.

When COVID-19 arrived, it was the Play Leaders who innovated first. With limited or no access to the physical Play Labs, Play Leaders used basic mobile phones to maintain regular contact with children and teachers. This organic beginning led to the creation of Pashe Achhi (which means Beside You in English), a remote learning mechanism that provides learning opportunities for children and psychosocial support for caregivers. It also serves as a new emergency infrastructure for early childhood development during crises.

Experts at BRAC IED brought together psychologists and play-based curriculum developers to create 20-minute tele-conversational scripts, with a component for psychosocial support and another component for play-based learning. 1,300 Play Leaders were trained on effective delivery of scripts, and Play Leaders facilitated weekly 20-minute one-on-one calls with caregivers and children. In total, 40,000 calls took place weekly until Play Labs reopened.

The experts provided scripts and training, but 1,300 young women working as non-formal educators put the plan into action.

The focus on women as non-formal educators derives from BRAC’s investment in women in communities across Bangladesh to work as catalysts for change in a wide variety of roles. These health workers, legal aid providers, programme organisers, non-formal educators and community mobilisers have been the backbone of Bangladesh’s incredible social development. In education, for example, Bangladesh faced a massive challenge: 40% of its primary-aged children were not in school in the early 1980s. Half of the students who enrolled dropped out, and only 30% went on to complete primary education.

BRAC reimagined education: instead of expecting students to go to distant schools with all the logistical burdens and costs associated with that, BRAC brought schools to the students. It created an extensive system of one-room schools in almost every community and trained women in each community to teach grades 1-5. The training of these non-formal educators made scaling possible, and the results were impressive. Almost 100% of students completed fifth grade, and BRAC students consistently did better than public school students on government tests.

The role of women as non-formal educators should be celebrated for its proof of impact, its scalability, and its vital importance. At least 175 million children do not have access to quality, play-based early childhood education, and the world needs 69 million new teachers by 2030. Women – especially those serving as non-formal educators – are the key to meeting this need.

Dr. Erum Mariam is the Executive Director of BRAC Institute of Educational Development at BRAC University.