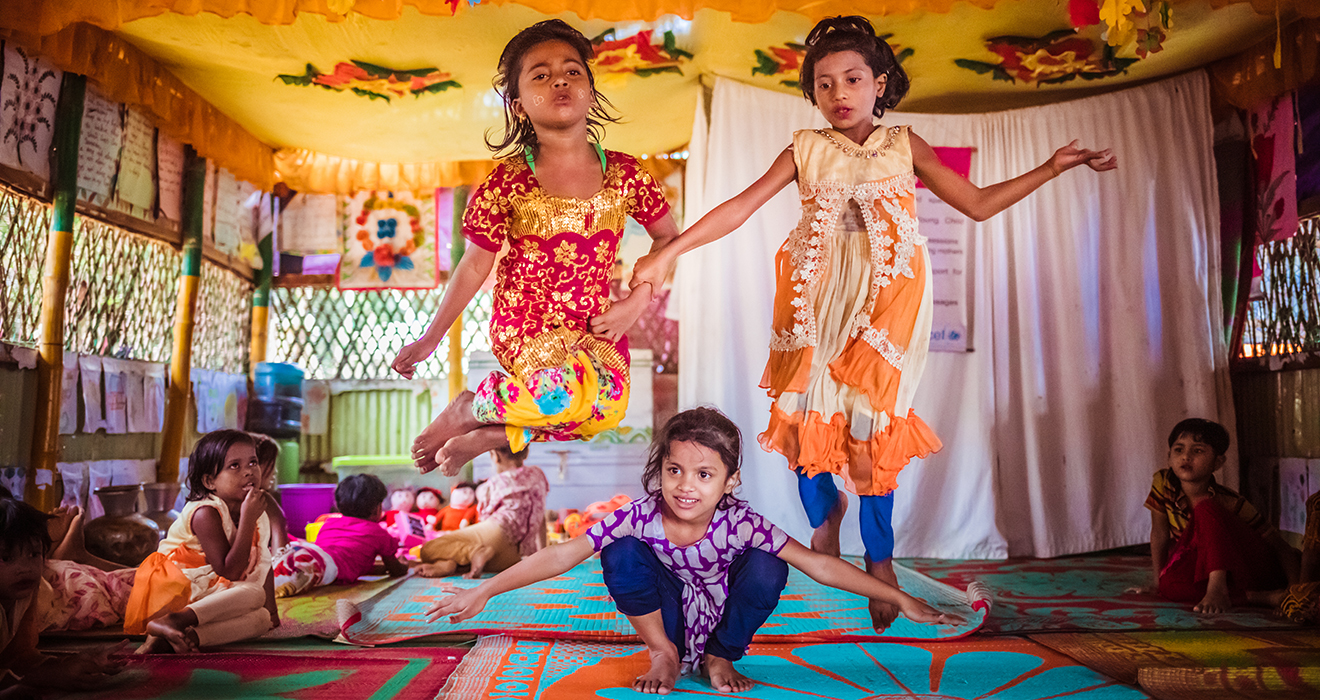 Below is a piece originally published in ECDAN.

A new study in Bangladesh reveals that play-based learning in early childhood achieves a key but elusive aim of preschool education: It ensures that, when starting formal schooling, all children are developmentally equipped to benefit from primary education.

This is a major finding for the field of early childhood development because it demonstrates the centrality of play to significantly narrowing the learning gap and achieving equitable education, especially for the most vulnerable.

The study’s results also demonstrate the importance of playful parenting in the holistic integration of play in early childhood. Play-based learning can engage parents in the educational process and builds relationships between the caregivers, the Play Lab facilitators – known as Play Leaders – and the children to achieve these results by extending learning beyond the classroom.

The two-year study, conducted by researchers at the University of Cambridge and Columbia University in partnership with local researchers in Bangladesh, evaluated BRAC’s Play Lab early childhood development intervention model in Bangladesh, which was created in partnership with The LEGO Foundation. The research study assessed the impact of the Play Labs for 367 children, ages 3 – 5, in low-resource settings.

Play Labs are safe spaces where children can engage in playful learning activities, supported by a flexible play-based curriculum – one that is culturally relevant and contextualized to suit local settings, fosters a sense of belonging, and that promotes children’s cognitive, language, physical, and social-emotional development. Play Leaders guide children’s learning and are selected from the local communities. They receive foundational training, monthly refresher trainings and on-the-spot mentoring in the Play Labs. They also facilitate play material development workshops with children and their caregivers where they guide participants in making low-cost and no-cost toys and decorations for the Play Labs. The play spaces and curriculum are designed by the BRAC Institute of Educational Development at BRAC University to encourage children to engage in singing, outdoor play, arts and crafts and dramatic and pretend play. Using a combination of child-led play, open-ended play, and Play Leader-facilitated activities, the curriculum encourages children’s active engagement.

While the study focuses on Bangladesh, Play Labs are now being scaled in Tanzania and Uganda, and BRAC recently partnered with the Government of Sierra Leone to support the Ministry of Basic and Senior Secondary Education to expand and deliver play-based, ECD through the national education system. BRAC has also adapted the model for children and caregivers affected by the Rohingya refugee crisis in Cox’s Bazar, Bangladesh. Additionally, a newly released Play Lab PlayBook provides essential resources and tools to equip partners and practitioners to adopt and scale the play-based approach.

Through multi-year partnerships with The LEGO Foundation and Porticus, BRAC has implemented 110 community-based Play Labs in Bangladesh and another 400 in government primary schools there. BRAC has also trained 315 adolescent girls and young women to serve as facilitators or Play Leaders in the community-based Play Labs and provides them with continuous in-service professional development and mentorship through on-the-spot coaching and monthly refresher trainings. Of the 367 children in this study, 196 were in 40 Play Labs (88 boys and 108 girls) and 171 were in a control group of children (87 boys and 84 girls), who primarily remained at home in year one and attended government-run preschools in year two.

What is so impressive about the study’s results is that the beneficial outcomes of the Play Lab experience for children were extensively and consistently evident across all four of the measures of development used. For instance, the Ages and Stages Questionnaire-Third (ASQ-3) measures children’s communication, gross motor, fine motor, problem solving, and personal-social skills. For each measure, the Play Lab children outperformed the control group children, at moderate levels in year one and dramatically in year two, resulting in very dramatic differences between the two groups over the intervention’s course.

Additional analysis clearly indicates that the gap between the initially weaker and stronger children narrowed. By the end of year two, there was only a small gap between the initially low, medium, and high-performing groups, indicating the Play Labs’ ability to level the playing field. This is vital to ensuring that all children enter primary school with the skills needed to succeed.

A central element of the Play Lab experience is engagement of caregivers in playful parenting. Here, the Play Lab experience significantly improved the parents’ knowledge, attitudes, and practices (KAP) related to early childhood development and education. By comparison, the control group parents’ KAP scores also improved, but not nearly to the extent of the Play Lab parents. Within each year, and across the whole project, the Play Lab parents’ scores were significantly greater than those of the control group parents overall and for all elements of the KAP interview protocol.

The fidelity with which the Play Leaders carried out the Play Lab program showed highly significant improvement in both years one and two. This is an outstanding and important outcome. In many educational interventions, lack of fidelity is a major problem leading to poor learning and development outcomes. The high levels of fidelity achieved here indicate the importance of the dosage and high quality of the in-service and mentoring provision for the Play Leaders by the BRAC team.

Overall the research shows that play-based learning achieves an outcome that could only be hoped for in the past. It reveals a path to ensuring all children are ready for school.

Now, with the Play Lab PlayBook, that achievement can be replicated. The PlayBook is a new dedicated knowledge and resource hub for play in early childhood. It is a toolkit designed to share the Play Lab approach and learning with government policy makers, practitioners, and advocates involved in promoting early childhood development locally, nationally, or globally. The Play Lab PlayBook includes the Play Curriculum, Play Facilitator’s Guide, parenting curriculum, research and monitoring tools, and Play Lab spatial design guidance.

We now have the research to light the path forward and the PlayBook to lead us on our way. That path goes to a brighter, more playful, more equitable education for young children everywhere – with lasting benefits that will accrue to the health and wealth of nations.

This blog post was created with the support of the LEGO Foundation.